Darwin-Walking in the Back Garden

Part I - Slowing Down in an Urban Garden

PREFACE: The next two essays were written a while ago while on vacation with my wife and in-laws in Germany. Their backyard fascinated me because of its richness and diversity of plants and animals. I want to share it with you today and invite you to put yourself in these pictures and explore your own backyard or park. Then, you can share your experiences, photos, or sketches with us and be considered for publication in this newsletter. Happy exploring! CdlR It’s 9 p.m. and the sun is slowly, oh so slowly, setting in the back garden in Echte, Germany. The garden is a polychromous riot of flowers and vines, ferns and moss-covered troughs, small pools, fruit trees, and patches of lawn grown wild, with mowed soft grass paths that invite walking, kneeling and even laying down to observe an earthworm exit tunnel or the violent act of a bumblebee scouring nectar and pollen from a willing flower. Everywhere I look there’s something happening. Camera in hand, I explore the vines that crawl high into the trees, their thumb-thick stems sprouting thousands of rootlets that attach them firmly to the bark of the trees. I find a banded snail quietly sitting on a tree trunk, hidden from view by the surrounding canopy and by its pattern of stripes. Charles Darwin’s interest in land snails is contagious even at this distance in space and time, and it extends far into the mechanism of evolution of species, colonization of islands and the experiments he performed. The only things missing in this yard are the carnivorous plants that he studied in his Down House garden, in Kent, England. But just about everything else is here. 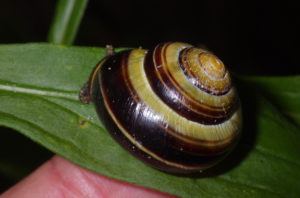 In the last few days, I’ve been observing and photographing what’s happening outside. I confess I’m a bit biased towards flowers and insect activity, which hold my interest hostage in a steely grip. Charles Darwin, the famous evolutionary biologist and explorer extraordinaire, was fascinated by land snails and their presence in oceanic islands. He puzzled over the fact that being intolerant to salt, they still managed to colonize far-away islands. In the garden, I see Darwin’s own observations of evolution in action every way I turn, and like him, I marvel, puzzle, ponder, and try to figure out the mechanisms (natural selection first among them) and the connections, the inconsistencies and the faulty explanations, mostly due to my own deficiencies of knowledge. Given the short time I’ll be here, I stop short of experimentation, but observation is carrying me far and wide. I brought my own leather-covered journal to record my observations, but in a bookstore, I found a green notebook with Darwin’s famous (or infamous, because he was a very poor artist) sketch of a tree of life with the words “I think” written above, inscribed on the cover. This was an inspiring example—to me at least—of the gradual shaping of ideas (for example, evolution, or “transmutation” as he referred to it) and the process of writing down notes, thoughts, ideas, concepts, and bits and pieces of conversations, and then bringing it all together at some point, often years later. I bought the blank sketchbook and now I’m using it, as a touchstone and as my muse. His drawing on page 36 of his “B” Notebook, written in July of 1837, shortly after his return from his spectacular three-year and three-months trip on the Beagle, says:

“I think case must be that one generation should have as many living as now.
To do this and to have as many species in same genus (as is) requires extinction.

Thus between A + B the immense gap of relation. C + B the finest gradation. B+D rather greater distinction.
Thus genera would be formed. Bearing relation”
[he finishes the sentence in the next page] “to ancient types with several extinct forms.”

This little green notebook now holds thoughts, sketches, and images of my own, inspired by a flora and fauna not much dissimilar than the one Darwin explored in his British garden in the years after his voyage. Thus, I’ll explore, observe, photograph and even ruminate about what I see, the little mysteries of life underfoot, of plant and animal relations, their struggles for light, nutrients, water and the untamable and purpose-driven drive to reproduce, to raise the young, to hunt and to avoid being hunted. Out in the back garden, the setting sun continues its illusory path, covering everything in a shroud of golden light. Everything shimmers and sparkles. The air is filled with tiny insects, midges and minute flies that flutter in apparent randomness against the light, with the occasional buzzing bumblebee dashing across the sun in a blur of motion and sound. Birds dive from low branches through the tiny swarms, land on the grass, pick something up, and fly back to the trees. The water spilling into the ancient water trough looks like streaming liquid gold, splashing lightly around the rounded and aged edges, creating yet another microhabitat, covered in mosses, ferns, and life. I can’t stop taking pictures of it, varying slightly the angles and the perspectives. A bird stops for a few seconds on top of the post that holds the copper tube that feeds the trough. It is a Eurasian blackbird: shiny black body, bright orange-yellow beak and orange ring around the eyes. It looks around, oblivious to my presence only a few feet away, and then flies off, allowing me to barely take three rushed photographs.

In the final moments of the waning light, just before the sun hides behind the far mountains, the golden sphere makes one final pass between a stand of tall pine trees, drawing the closing touches to the prolonged dusk. Next will be a slow vanishing of the light extending well past 10 p.m., messing up my biological clock, which seems to have evolved closely with those of chickens who feel bedtime is when it gets dark outside and wake-up time is when it gets light. At this rate, I’d get no sleep at all. A tiny winged seed flutters in front of my eyes and lands on my notebook, creating a small challenge to figure out where it came from, a task for tomorrow. I gather my camera, notebook, and pens and head inside to write a few notes on the computer, my own version of my “B Notebook,” a companion to the field journals and the photo books that will follow. As I look out the window (it’s now 10:20 p.m.) the sky is deeply stained in a palette of blues and reds, the forest lining the far mountains silhouetted against the clear sky. It’s been a quiet day in Echte’s backyard, filled with wonders and wandering. Many more to come.