“Topaz” Is Back at Lindsay Wildlife Experience! What: A visitor favorite in public programming at Lindsay Wildlife Experience, Topaz, the resident female Golden Eagle is set to make her debut, once again, as an exhibit hall animal ambassador in January. Visitors have not seen Topaz for more than a year. Due to reoccurring feet problems and a change in her personal animal keepers, Topaz had to be re-trained and off Lindsay’s exhibit hall floor. But now one of Lindsay’s star attractions is coming back to greet and help educate visitors.

When: Beginning in January Topaz will be available for viewing to the public every Thursday at 4 p.m. Additional dates to come in February.

Interesting Facts: This Golden Eagle was found in the Lake Tahoe area, near Lake Topaz, for which she is named. She is unable to fully extend her wing, which prevents sustained flight. Animal experts at Lindsay determined that Topaz is a female because of her size—11 pounds! Locally, the nearby Diablo Range is home to one of the highest concentrations of wintering Golden Eagles ever recorded.

Topaz Background: This 11-pound bird came to Lindsay in December of 2005 but turned out to be very ill at the time. She had an infection, mites in her feathers and later it was discovered that she had mass causing internal infection that required surgery. 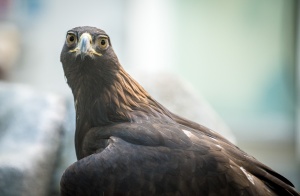 “Our first task at Lindsay was getting her well,” said Lindsay Interpretive Programs Manager Sarah Parnell. “Then we had to work on training an adult wild bird.”

In 2007 Topaz laid her first egg at Lindsay, confirming she is a female. Since then she has laid eggs every year, according to Parnell.