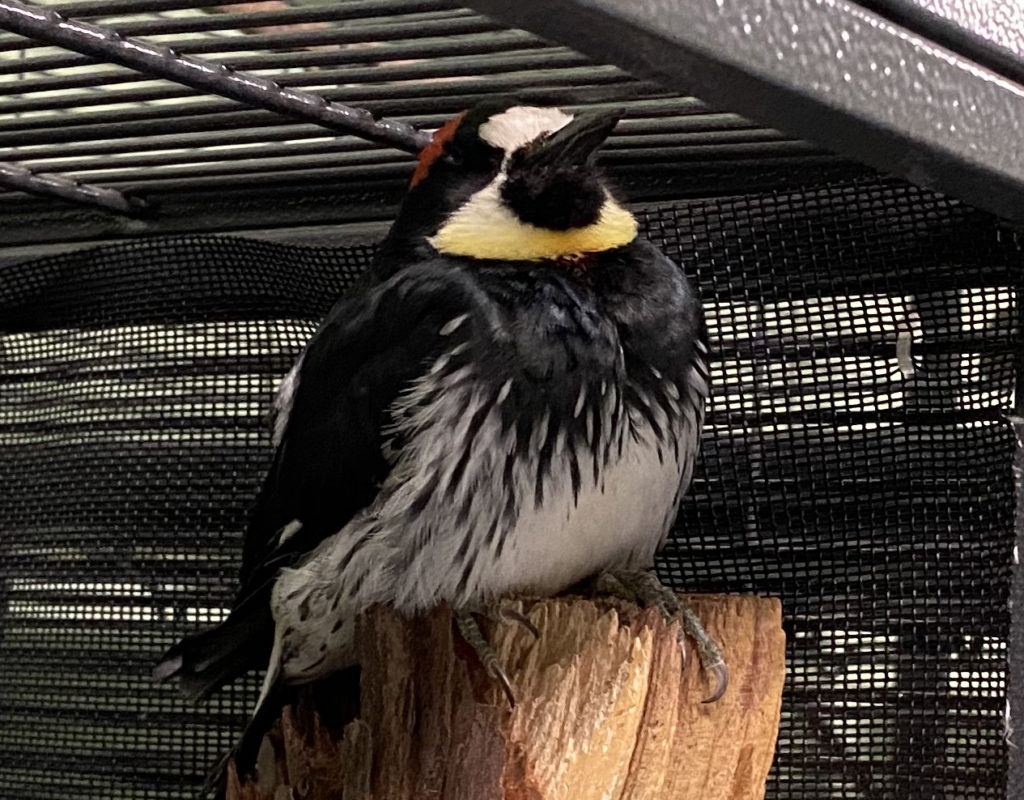 Acorn Woodpeckers, much like their name suggests, feed heavily on acorns. However, they will also feast on many types of insects, tree sap and fruit. They will listen for movement in tree bark and use that sharp beak to break into the tree. Then, they use their long tongue to fish out any insects that they manage to latch on to.

In California, Acorn Woodpeckers will create granaries by drilling holes into objects such as dead trees, telephone phones and even wooden buildings to insert an acorn and peck it in for later. This homemade storage unit will allow the bird to visit and feast  during the winter when food may not be as plentiful.

Habitat loss is a major threat for these native birds. What can we do to help? We can preserve trees that Acorn Woodpeckers flourish around, including mature oak and pine-oak stands.

Lindsay Wildlife is home to one very vocal Acorn Woodpecker who is named for the signature bright red marking on her forehead: Garnet!

Garnet was discovered as a juvenile on the ground in San Ramon while showing evidence of an animal attack. She was brought to our Wildlife Hospital in June 2019 where it was determined that in addition to the injuries she sustained in the attack, her vision was impaired due to an abnormality in the structure of her eyes that was likely present at birth. Garnet’s impaired vision would significantly limit her ability to forage and evade predation and it was therefore determined that she could not be returned to the wild. In 2020, Garnet officially joined our ambassador team. Her enclosure is specifically designed with both the biology of an Acorn Woodpecker and her reduced vision in mind with plenty of wood for “pecking” and foraging as well as strategically placed perches to help Garnet navigate her environment. During the day, Garnet can be found busily pecking at new enrichment, foraging for her diet and talking to her caregivers.

Garnet currently lives behind the scenes at Lindsay Wildlife. Be sure to check out our daily programming for a chance to see her up close.